Interview with the authors behind AJ Kazinski 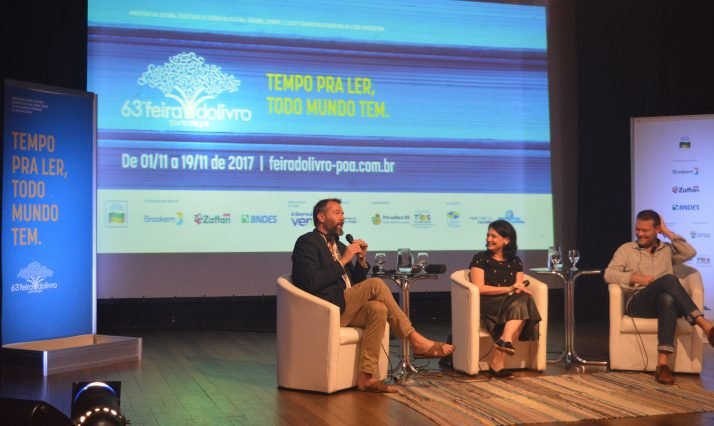 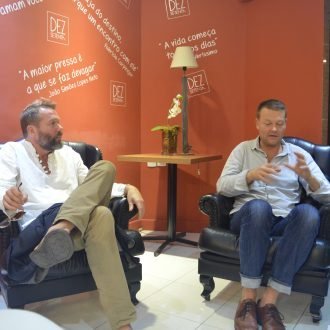 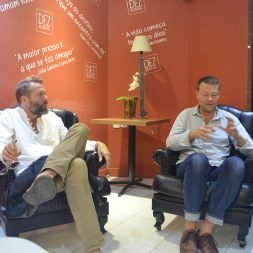 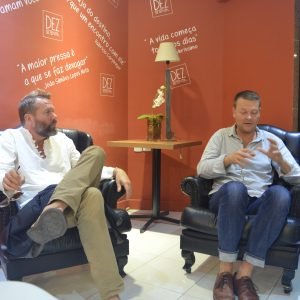 An afternoon in November, we sat down with the two Danish authors, Anders Rønnow Klarlund and Jacob Weinreich, who was in Porto Alegre to participate in the 63rd Book Fair, to talk about their books and Scandinavian literature. The two authors have been writing together for 10 years under the pseudonym A.J. Kazinski and they have currently three books published in the Brazilian market: O Último Homem Bom, A Santa Aliança and O Sono e a Morte. We wanted to know more about their unique way of writing together under one name.

You’ve been working together for 10 years, how did it start?

Jacob: Well, Anders has made, I think, 5 feature films, at that time he was a film director, and I was educated as a screen writer from the Danish Film School, and I had this idea for a movie. I sent it to Anders and he sent it back and we met at this place called Zentropa where Anders was working at that time, a place where Lars Von Trier is working and a lot of Danish film directors, and I came out there and we talked. Then this idea changed 180 degrees 10 times and we spent almost 2 years sitting on a bench next to Anders’ house once or twice a week, talking about this idea. After 1 or 2 years we started to write this script and it became pretty long and we had to try to finance it, and it was maybe like 30 mio. DKK, and we weren’t able to finance it. Then Anders asked me “Why don’t we write this into a novel”, and I was a bit skeptical in the beginning. For me, writing a novel is something different than writing a script. Then we decided “Okay, we can do it”, because we had spent so much time writing it and all of our great ideas, as far as we think, were in that story, and then we decided to go and write a novel. And then a little adventure started actually, because the script had an agent and even before the book was published, it was sold to more than 20 countries, and it became a huge success.

Anders: The funny thing was that the story in The Last Good Man won the prize for the best novel of the year in France, and there was something in that story, you know. We’ve made stories all our lives, professionally for 25 years and even more, and suddenly there’s something that you come up with that appeals to a bigger audience, and I think until this day, and I think all authors feel this, there are stories you come up with where you think, “This is it”, and then nobody responds.

So it doesn’t get easier the more you do it?

It becomes more and more mystical the more we do it. That’s fascinating. There’s something about it that defies the laws of everything. The storytelling, that’s the beauty of it. It hasn’t become easier: a lot of things have become easier. Working relations, finding out that the older you get, the faster you read people, and say “okay that is that sort of person, and let’s not go there”, especially in business, there’s a lot of special types, like psychopaths. I think they’re overrepresented in the movie business.

And now you’ve decided to write under one name. How do you feel like you individually complement each other and bring different things to the table?

Anders: If you look at big companies, they’re always named liked Price Cooper Waterhouse, always these company names with more than one (name), and I think that’s because men are too incomplete to work alone. In business, a man needs a partner.

Jacob: Yeah, we have too big thoughts about ourselves sometimes, we have this idea that we can do everything, and sometimes you need another person to tell you that you cannot.
Anders: For a man, I think the most important thing, and I told my son the same thing, is to find a partner that can do the things that you can’t. And that you can trust.

Jacob: And in the beginning, it was only the idea that we should write this one novel, and that was it, and then it became this huge success, and you can say, now we opened the door to success and it was difficult just to close it again.

Anders: To go back to making art movies again that nobody wanted to see.

And how did it end up being this genre that you wanted to write in?

Jacob: The story about The Last Good Man has just travelled, and that was the first one, and you know, the first one is always special, and it has this global appeal.
Anders: We’ve received e-mails from Argentina and all over, and they write to us about this, but also about other books. That’s the good thing about social media. We don’t like social media that much, but we like receiving e-mails from fans.

So, you don’t think that it’s just a trend, you know with the Scandinavian noir, all the TV-shows and books coming out…

Anders: There’s always a trend. In the 1980s there was a trend with Latin American literature, like Gabriel Garcia Marques and Isabella Allende. Magical Realism was so big in the 80s, and now we’ve been lucky in Scandinavia because we don’t have so much to tell stories about in Scandinavia, because everything is so well functioning there. Another fact about fiction is that many people use fiction to escape. The core of fiction has always been to escape, to forget your life and submerge into someone else’s life who either has it worse or better, but the effect should be that you forget your own life for 14 hours. That’s what fiction is built on.

And now that you know a little bit more about our Institute and the intercultural dialogue between different countries which we work with. What do you see the role as being for a Cultural Institute?

Anders: It’s difficult. I think it’s difficult to subsidize culture. I wish it could be easier. But culture works best with pure capitalistic terms. That people buy exactly what they want and people see exactly what they want. It’s really, really difficult which we will see in an hour when we go there (to present at the book fair, red.) and there will be 3 people sitting there to hear us. It’s really difficult to subsidize culture. We’ve tried many times sitting in the Cultural Center in Paris with 10 other authors, and there’s only embassy people there. So, what’s the role? It’s a difficult role.

Today with globalization and many cultures interfering with each other, we have something here that is Danish and that represents Denmark.

Anders: I don’t think the Danish or the Brazilian culture will ever be pressured, because people want it local. When we want something as a cultural product, a film, a book, a theater play, a ballet, you want it to be local. The more local the better. We don’t want global literature, so that’s not a problem. The problem is how can the state help introduce Danish culture to the Brazilian audience. And I think maybe the best way is to subsidize the private companies, like the ones who buy our books, to give them financial support in their marketing or something. What picks up, music, culture, it’s so unpredictable.

The Institute works to bring cultures closer to each other through art; what do you think about this approach?

Jacob: It makes sense. The idea of art being able to move two countries/cultures closer to each other. By experiencing another country’s artists, it gives you the impression of getting to know the other country’s culture a little better. What it has meant to Danish/Brazilian art to have us here at the book fair, is hard to say. But in some way, we’re like a small piece of Denmark who’s ended up here in Porto Alegre. A “Danish way” to see the world, I think.

When you hear that books like “The Secret of Denmark” (by Helen Russell) and The Danish Way of Parenting (by Iben Sandahl) are so popular here in Brazil, what are your thoughts?

Anders: Well, what Denmark is really good at, is society. So, I understand why people want to explore that and see “how can we have society like that”. And even Danish people cannot explain why we have such a good society.

Jacob: We cannot explain it, it’s like a million small things. There are 1000-year-old traditions. Why do people voluntarily pay half of what they earn to the government? Danish people are happy to pay their taxes, but how do you get to that point? It’s really special.