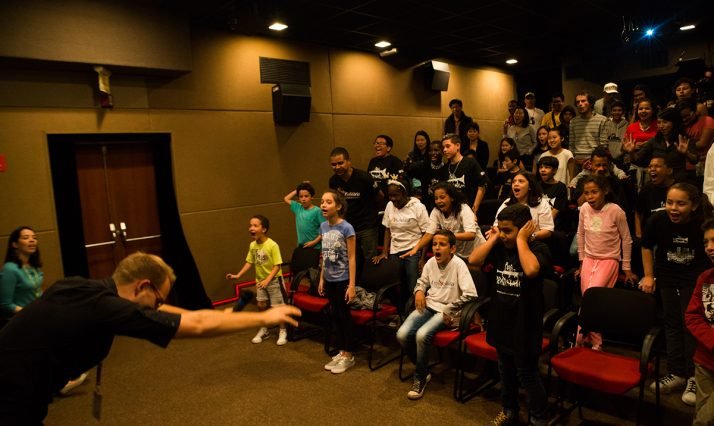 For many years, Munch has worked with film pedagogy and created workshops for BUSTER. Furthermore, he is a very coveted composer and dramatist. His latest production being the musical “I Love It” about the life of skincare guru Ole Henriksen. For the coming two years he has been hired as in-house composer at DR Musikariet – a house for children’s music festivals and concerts. Later this year he is travelling to Russia with his interactive piece “The Endless Labyrinth / Den Uendelige Labyrint”.

DCI met him for a talk about children’s films, creativity and learning. Including what it gives Brazilian children and teachers to experience and play with a children’s film universe, where mermaids can show breasts, the language is a bit more straightforward or a film does not necessarily have a happy ending.

This is the second time Mathias Madsen Munch is in Brazil with BUSTER and has been working with the film festival for many years. “First year in Brazil our workshops were mainly theoretical. The purpose of the workshops was to give the Brazilian teachers an idea of the Danish approach to learning and the role of creativity in education in the Danish primary schools, says Munch. “For them the Danish approach is more loose, compared to Brazil where you have a more authoritarian approach to teaching”.

When BUSTER came to Brazil

2016 was the first year the BUSTER Festival moved into the big Brazilian Cultural Centers with support from The International Cultural Panel in Denmark together with the Brazilian Centro Cultural Banco do Brasil (CCBB), which is the cultural epicenter in the larger cities and owned by the country’s oldest bank – Banco do Brasil.

In Brazil, they have a clear eye on the Scandinavian children’s film universe and on how schools use film and media in classes. After the first year of Buster Festival in the large South American country, a week program has struck roots in the larger cities, and in 2017 with 95% Brazilian support from CCBB.

Why do you think CCBB has put much effort into this collaboration?

“There is an interest for Danish films in Brazil. They seem to touch a chord. In addition, BUSTER is a very well-reputed festival with good products for children, which also play a role. It takes children seriously”.

“It has been interesting to experience how the large Brazilian banks assume co-responsibility for the cultural life, as an example is it free to participate in the events in the cultural centers. For the centers  it gives great energy to have children’s activities there and furthermore it creates a sense of community”.

The initiative of the festival still comes from Danish Cultural Institute in Brazil and the movie program is selected by BUSTER Film Festival in Denmark.

The program of 2016 was a success and CCBB has fully taken on the role as host and funding with a local producer of the program in each city. Only the film workshops are being financed from Denmark.

Nikolai Schultz from BUSTER Film Festival curated this year’s program, that presented films with room for dialogue and reflection, giving children the chance to discover the many and different universes. 36 films were selected for this year’s program, which also included a new Brazilian film. An important element in the festival is taking time to talk about films and make films. The dialogue and the practical part are closely linked with the experience.

How do the Brazilian audience experience Danish children’s films?

“That they are fun and crazy, but also take the children seriously. The Nordic films have a completely different way of communicating to children. I often think that the film directors make these films because they themselves think it is fun. For instance Wikke and Rasmussen’s film. There is also less explanation and happy endings in the Nordic films”.

“Maybe this is because of the higher degree of violence in the Brazilian community, Munch comments. “To them it is not only a game.

In Denmark, children are at an early age exposed to challenging subjects, and I believe you should be given a chance to process the things you experience. In Denmark for instance, I have made film workshops with girls who worked with subjects such as bullying, homosexuality or “cutting”. Similarly you could in Brazil maybe work with the subject of violence”.

What did it give you personally to be part of this project in Brazil?

“The music is heavenly rooted in the Brazilian culture and as a music person it is great to challenge yourself. Here music is everywhere. It is also fascinating how much we have in common, – the same type of humor. I think it is always great to visit another culture and country. We are very privileged here in Denmark, just think of all this we can make with children”.