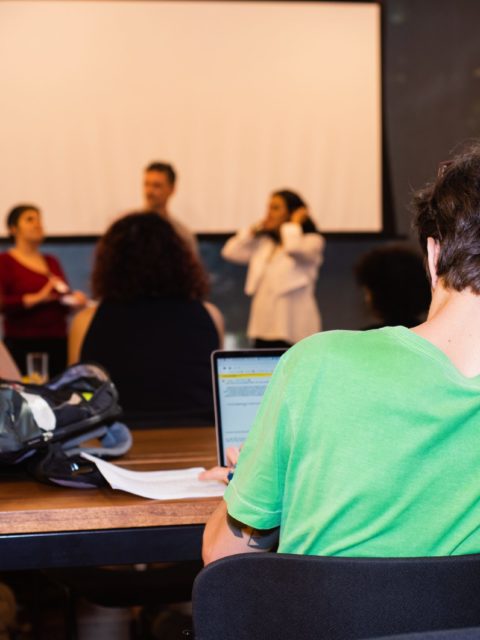 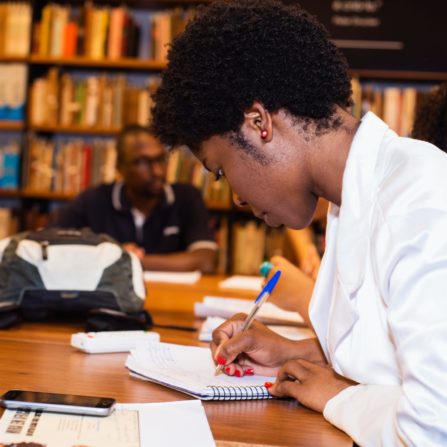 With the intent of developing increasingly the emerging audiovisual market, the Ponte Nórdica Festival lauches the Diálogos Nórdicos Mentoring Lab, aiming to orient producers who are just now entering the national and international audiovisual market.

With the intent of developing increasingly the emerging audiovisual market, the Ponte Nórdica Festival lauches the Diálogos Nórdicos Mentoring Lab, aiming to orient producers who are just now entering the national and international audiovisual market.

What is Diálogos Nórdicos Mentoring LAB?

The interventions aim to help close the gap between how the Brazilian population is presented and represented in the audiovisual productions and careers, and how it really is. Along with that, the lab contributes to bringing a greater and newer variety of narratives and perspectives to the international public, and inspiring Nordic audiovisual professionals by presenting them to surprising new stories and dimensions. 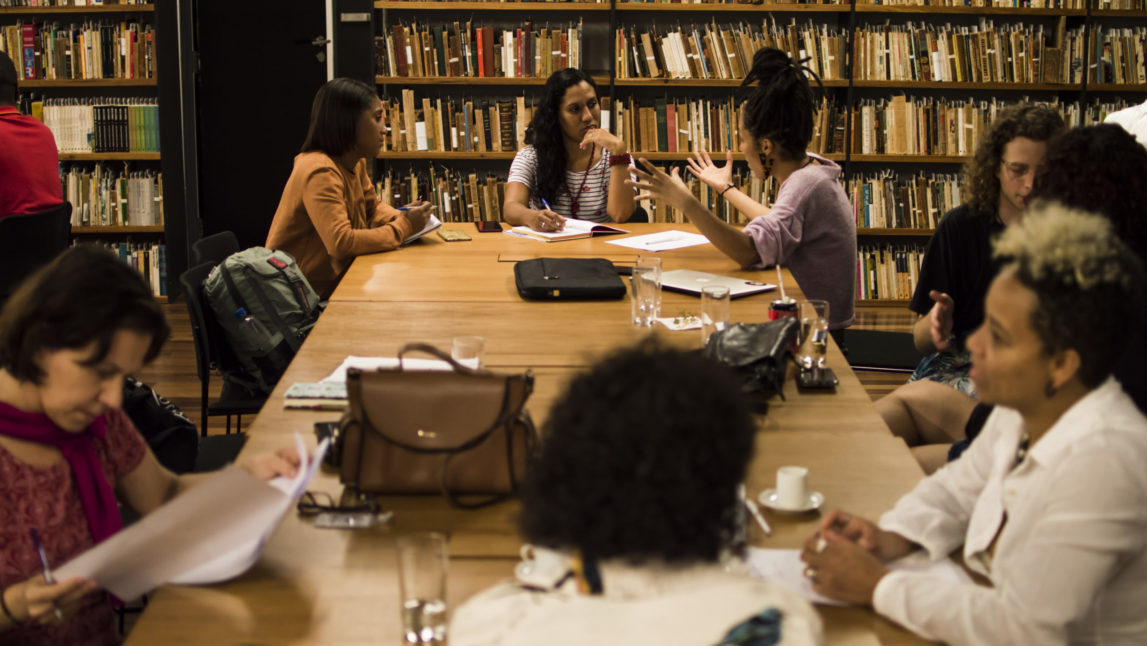 A very successful pilot was carried out this year, in September 2019, as part of Nordic Dialogues – a three-year initiative organized by the Danish Cultural Institute (DCI) and the four Nordic Embassies in Brazil. The ambition was to provide a mentoring that would prepare the participants to achieve satisfactory results in market pitchings, both in Brazil and internationally. Nordic Dialogues aims to foster debates in the Brazilian society and exchange of experiences, by creating bridges and sharing ideas on issues like race, gender and diversity equality. It aims to promote the concretizing of the production, promotion, distribution and exhibition of audiovisual products, focused on people who in some way or another are underrepresentation in audiovisual narratives, both in front and behind the cameras. The emphasis will be on supporting women, LGBTIs, racialized people and people with deficiencies, who are interested in developing new tools and strategies for financing and producing their projects.

The methodology consists of mentoring processes to develop the selected proposals, talks by the mentors, and speed pitching training, all with the purpose of strengthening the participants’ feature and short films, documentaries and series projects on the long way to the screen and the audiences.

The Institute received a total of 69 proposals in just one month of open call, which showed a great interest and relevance of an initiative like this, considering the current situation in Brazil.

Ten different projects were selected to take part in the first edition of the Diálogos Nórdicos Mentoring Lab. The committee was composed of representatives chosen by the Nordic Embassies, Ancine, the Danish Cultural Institute and Festival Ponte Nórdica. The selection of the participating projects was be made by the Committee based on criteria relating to the theme, relevance and diversity aspect of the project, as well as who was behind it. The objective of this year’s mentoring lab was Diversity Matters.

The mentoring lab pilot featured one Nordic and two Brazilian mentors, who were invited to provide the best guidance for the participants and their project pitchings: from Sweden, the award-winning producer of the movie “The ex-wife”, Marie Kjellson; and from Brazil, Érica de Freitas, who is post-graduate of scriptwriting to film, media and television; and Tatiana Leite, Executive Producer of the film “Benzinho”.  The laboratory was a three-day event at Casa Firjan, Rio de Janeiro, from 2 pm to 6 pm. 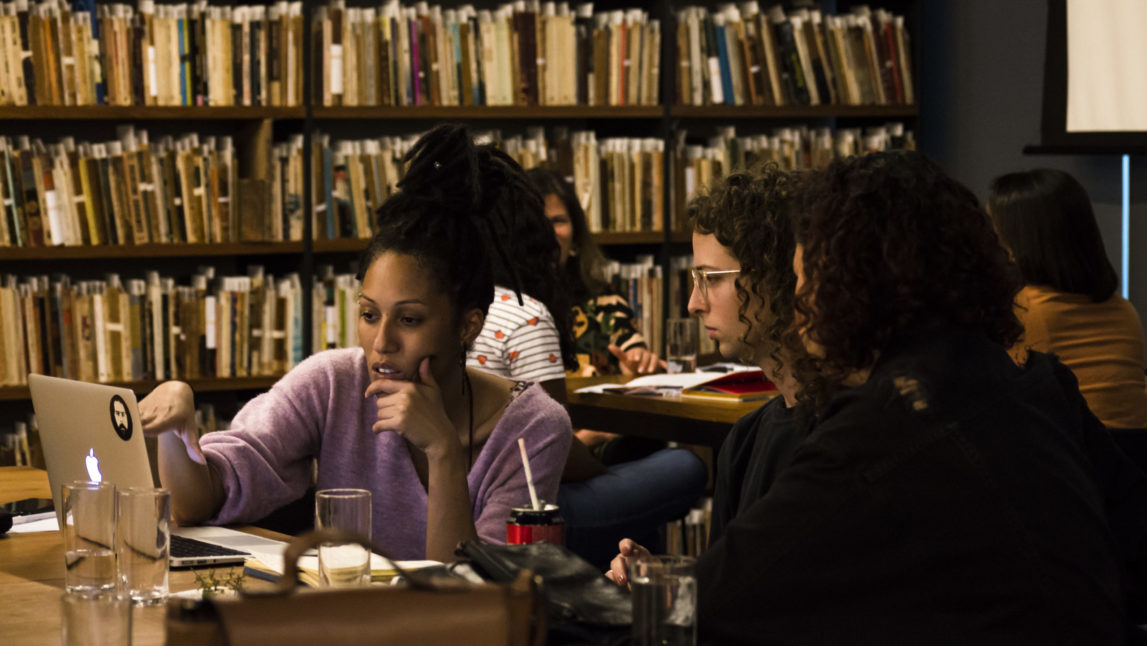 The first day started with welcoming and introductory speeches to the Nordic Dialogue Laboratory, held by the idealizers of the lab and the mentors. After that, there was a presentation of the mentors, where they spoke about their experiences and their current projects (which ranged from audiovisual productions to management of initiatives focused on helping other producers to make their films), followed by a presentation by Myriam Assis de Sousa from Ancine on how to gain financial support through the Ancine fund for audiovisual projects. The day continued with workshops of Production and Co-production in the Nordic Countries; and Diversity, Gender and Race Equity in the audiovisual industry in the Nordic countries, by the Swedish mentor Marie Kjellson. 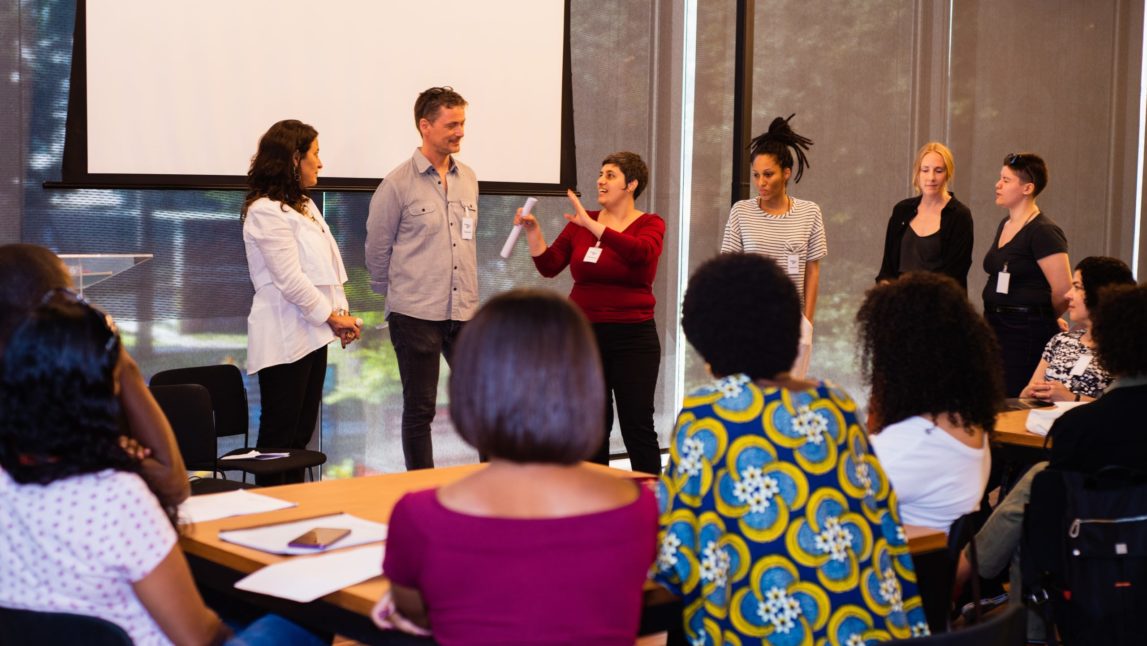 The second day started with the workshop Diversity & Gender and Race Equity in Brazillian Audiovisual Productions by the Brazilian mentors, followed by case studies: projects presentations and analysis of the main elements of each project presented, by focusing on motivation and intention in order to guide each project in the right direction of financial and creative partners. After that, an introduction to the theoretical and structural elements of pitching and communication of the projects under development, in order to suit the participants for different ways to pitch internationally and nationally. After the mentoring activities, there was held a screening of the Icelandic documentary film “The Kitchen Sink Revolution” by Halla Kristín Einarsdóttir.  It was an open invitation. 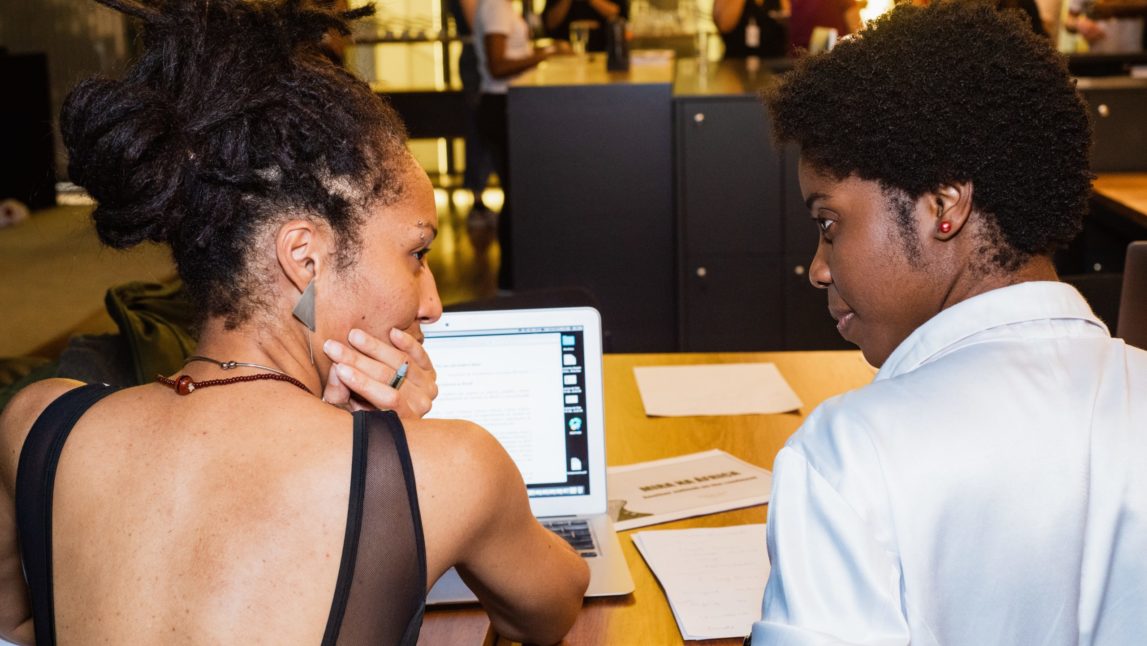 The last day started with “group meetings” with mentors, where participants had the opportunity to practice techniques and strategies on how to sell their ideas, and improving skills in presenting and communicating their projects. The last thing on the mentoring agenda was a plenary session: 5 minutes pitchings of each project with feedback from the mentors.  After the end of the last day of mentoring, there was a celebration of the lab with the Danish beer Bear Beer, provided by Harboe, where participants and mentors had the opportunity to network and toast the three days successful event. 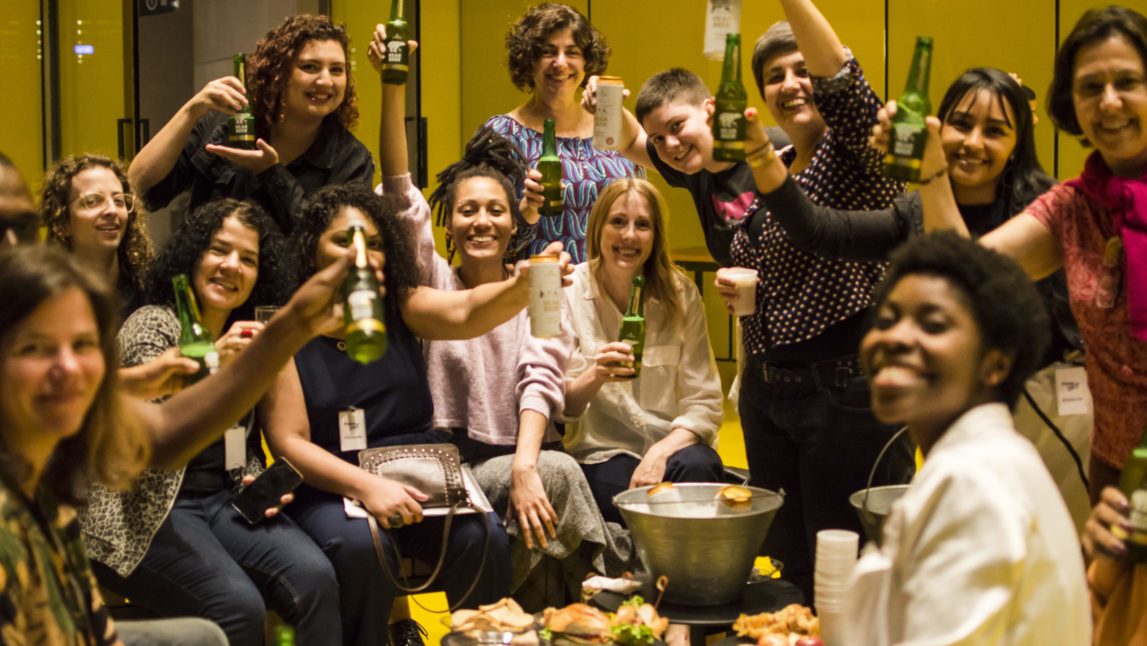 The three days were scheduled with coffee breaks, catered by the chef Maristella Sodre, who arranged a healthy and sustainable buffet, with snacks and sweets for the participants. Maristella is graduated in gastronomy and, after concluding the course “social gastronomy” at the NGO Gastromotiva, she started working with the idea of consuming 100% of the food she cooks with, not letting any part go to waste. She works with catering of parties and events, as well as teaching and lecturing. 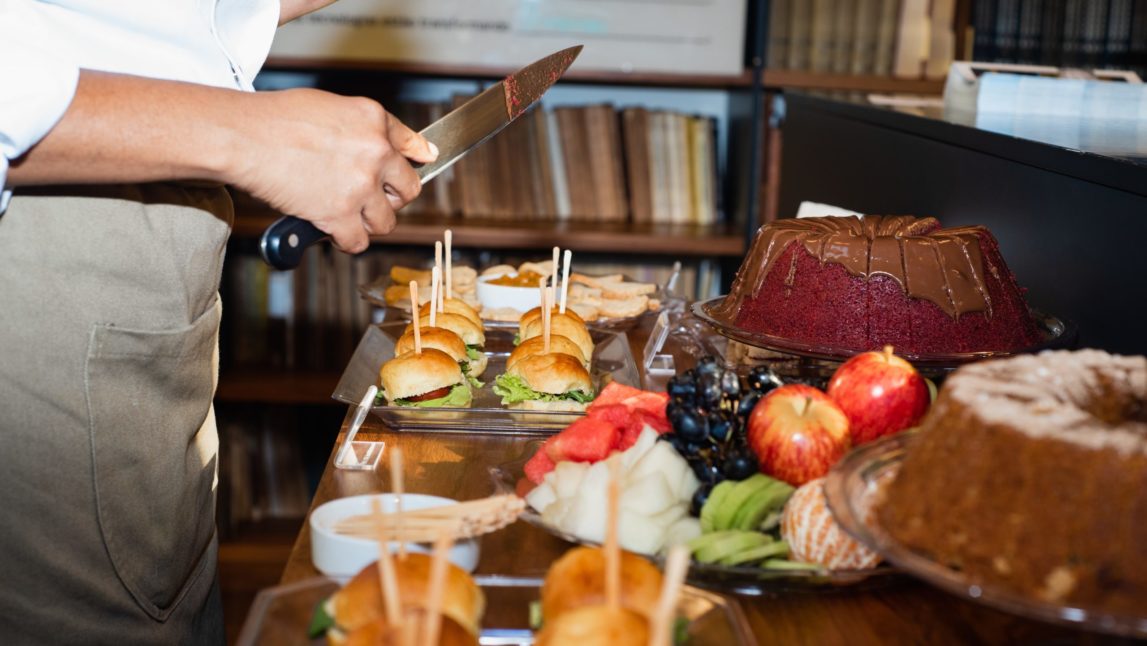 “Participating in the lab is an amazing opportunity from both ends (mentor and participant), ensuring the long-term growth and international collaborations within the industry. The outcome of such activities is often visible over time, as people develop their careers and meet again in the future. Building bridges today – crossing them tomorrow!”

“I came to better understand the financial funding for my project and the importance of a profound research.”

“I thought the reviews I received on my project were very good. I discovered strengths and weaknesses of our work. I also liked the suggestions from potential partners.”

“The Lab was extremely important, especially to me who is at the beginning of the project. It was gratifying to hear new guidelines.”

“It was wonderful! I made some progress. I came to the Lab with a short resumé and left with a first outline of the executive production.”

“The consultations were very interesting and with very different perspectives, which contributed a lot to rethink the project and the strategies.”

“I really enjoyed hearing about the other projects. The mentors were very attentive and focused. The staff were very friendly.”

“The Lab was very relevant to get us thinking about the format of the project, how to tell its story, which aspects to work on before we sell the idea. Besides that, one of the biggest things for us was to think about the production possibilities, to think in which ways the making of films is, at some level, viable.”

“Having many different projects in different stages of pre-producing was very cool, because it got me thinking about my own project in a more global way – already predicting future situations.”

Marcelo lives with his mother and his dog, at his grandmother Amalia’s house. He is 3 years old and loves to play with his best friend, Amarelo, the dog. One day he hears the loud noise of a car crash, and his mom rushes to the street to see what happened. A discussion is going on between the people involved, one pulls out a gun, and the mom gets shot. Antonio, a neighbor, brings the sad news to the grandmother. Marcelo clings to his friend, Amarelo – they are inseparable. Times go by, Amarelo dies and Marcelo begins to suffer from melancholy. He locks himself in his room where he releases his aggressions through video games. One day he dreams of Amarelo and recovers from his anguish.

According to the 2010 Census, Brazil has over 45 million people with disabilities, such as physical, intellectual, visual, auditory or sensory. What few people think about, is how it affects the sexual life of the disabled person.  Through interviews with various people, ASSEXYBILIDADE combines two themes from the Brazilian society: sexuality and disability.

TODAS EM MIM is a multiplot fiction feature film that tells the parallel stories of three black women: Azi, Irla and Ana. At first, the only commonality between them is motherhood, although it is configured differently in the experiences of each of the three characters.

DOGON’S SON is a tv drama series with 10 episodes of a children@@’s adventure. The series addresses the cultural diversity in Brazil with themes related to maturation and formation of pre-teens from a world where telepathy and special powers are possible.

The movie is about a girl, Antônia, 28, who one day suffers from a panic attack in the metro. She isolates herself from friends and puts her career on hold. One day she meets an old friend from university, Marcelo, who knows Tatiana, that is addicted to anxiolytics. Meeting Tatiana arouses the desire to start over – if so, she must overcome the paralysis of fear of a new panic attack. Antônia often dreams that she is walking by the beach. One day when she goes to a party, she meets Tatiana in the line for the bathroom. They go to the beach together and suddenly Antônia recognizes the place she has been dreaming of.

MIRA EM ÁFRICA – ‘Another look at the continent’ is tv-series formatted as documentaries hosted by Rudmira Fula. Alluding to the name of the host, and with the idea of making people globally aware of the of the unfamiliar reality of the African continent.  The program positively explores tourism, curiosity, culture, gastronomy, history, people and the beauties of countries, demystifying the stereotypes built over the years by the global media.

The belief that there are no racial conflicts in Brazil is the result of the propagated concept of racial democracy, especially from the second half of the twentieth century. The concept was initially thought to translate the aspirations of a Brazil to be built in a post-abolition future, eventually became a repeated fallacy by some sectors of the Brazilian academic and economic elites, which fueled the creation of universal legislations and made the struggle of black social movements invisible since the beginning of the century.

This documentary presents the meeting of three women who have their lives linked to the sea.  A triangle, where the tips that border the Brazilian and African Atlantic find a powerful vertex in the Mediterranean Sea.

Renata and Rodrigo live together in Glória (Rio de Janeiro) and they are best friends. One day, Renata attends a lesbian meeting event where she meets Tati, and she falls in love with her. Tati starts to date Renata’s ex-friend, Julia, but they end their relation shortly after. Tati meets up with Renata again and their love for one another starts to blossom.

In 2010, Rio explodes in optimism after being chosen to host the next Olympics. In the multicultural neighborhood of Santa Teresa, live and work Joana and Martha – friends and partners in a video production company. The two, in their thirties, seek love and pleasure as they split between the desire to make art films and the need to do more commercial work to escape bankruptcy.